The Rīga Conference 2022 ideas are a seed for momentous change 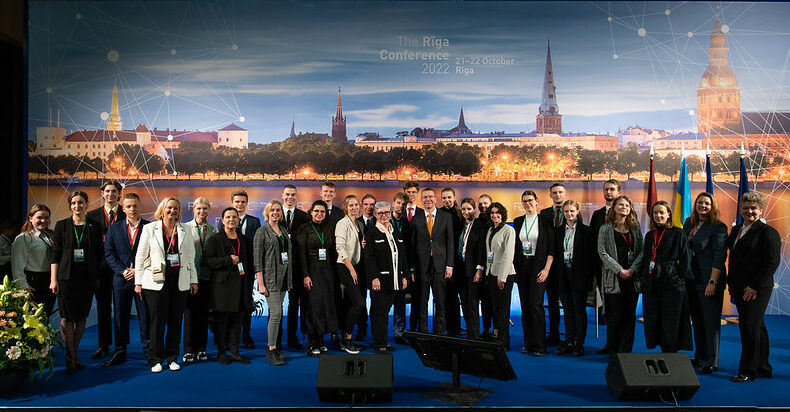 The Rīga Conference 2022 ideas are a seed for momentous change

The annual security and foreign policy forum, The Rīga Conference 2022, has closed on October 22. There were 640 participants present with 90 accredited media. The Conference was streamed live in Latvian, English and Russian via Latvian Television, LSM.LV, LMT Straume, tv3.lv, GO3 Latvija. There were 35 information partners broadcasting the live stream on all continents.

The organisers Latvian Transatlantic Organisation will continue to evaluate and anchor the international impact of the conference over coming months. The main topics were: the unprovoked Russia’s war in Ukraine, resilience in strategic planning and responsible leadership, Transatlantic cooperation, economy in the time of sanctions, global data and cybersecurity, role of women in maintaining and restoring peace and security, as well as role of the Baltic states and the region in containing the war in Ukraine, in upholding the vigilance and resilience of Europe, and region’s role in the restoration an integration of Ukraine in Europe.

Executive Vice-President of the European Commission for An Economy that Works for People Valdis Dombrovskis:
“The EU will continue providing Ukraine with political, military and financial support, and step up humanitarian aid as winter approaches.

We are working with international partners to isolate Russia economically and politically on the world stage.  And we have imposed sanctions to reduce the Kremlin’s ability to wage war and to weaken the economic base that supports the Russian military complex.

Our own people and businesses are going through a tough time too, in a cost-of-living crisis driven by sky-rocketing inflation. So we are helping them to cope with high energy bills and protecting the most vulnerable, like low earners, while moving as quickly as possible to end the EU’s dependence on Russian energy imports.”.
The organisers are grateful to the supporter European Commission Representation in Latvia.

The Minister  of Forign Affairs Edgars Rinkēvičs said in his closing speech:
“Strategically defeat for Russia would mean the unavailability of its military and economic machines to launch any conflict against its neighbours in the future. It is very clear what victory in Ukraine means complete restoration of the territorial integrity and reconstruction of the country. Ultimately, I believe Ukraine has a place in the European Union. We need to remind the world and work on accountability of Russia’s war crimes and aggression. … I hope that in time for the next Rīga Conference the West will still be back and united, the South will be united, Russia will be defeated and Ukraine will win!”

The Chairwoman of General of Latvian Transatlantic Organisation Board Prof.Žaneta Ozoliņa reflects:
“The Rīga Conference 2022 this year was dealing with a range of issues that require fast, innovative, decisive an brave visions. In the situation of the war in Ukraine, raising imperialistic ambitions of Russia and China, as well as potential emerging conflicts around the globe, there is a need for actions based on exchanges of views between experts and politicians. The Rīga Conference 2022 has created such a platform, provided an inspiring environment and gathered the most prominent experts in the international security domain. The ideas are there, now it is time for decisions and actions which would bring international society closer to stability and security.”

The conference supporter AUDI Latvia drove guests with electric cars over more than 2685 km combined routes, as far as Kyiv is to Madrid. It reduced more than total 1,3 tonnes of emissions.

The conference supporter “Mario” baked 4590 traditional cookies “riekstiņi” (nutshells) for the coffee breaks and delightful 300 litres of coffee were served to participants.

There were 23 dedicated volunteers ensuring the conference was running smoothly. There were 960 000 steps put forth by the organisers and volunteers over 2 days.

You are welcome to use the pictures of the Rīga Conference by © Valdis Kauliņš under the Copyleft Share-Alike (https://creativecommons.org/licenses/by-sa/3.0/ )

The Rīga Conference 2022, October 21 – 22 was organised jointly by the Latvian Transatlantic Organisation, the Ministry of Foreign Affairs of the Republic of Latvia, and the Ministry of Defence of the Republic of Latvia in close cooperation with the NATO Public Diplomacy Division, European Commission Representation in Latvia and Konrad Adenauer Foundation in the Baltic States. The conference was supported by Microsoft, the Embassy of Canada in Latvia, the Embassy of the Federal Republic of Germany to Latvia, the United States Embassy in Latvia, NAMMO, LMT, Embassy of Israel in Latvia, the Embassy of Spain in Latvia, Nordic Council of Ministers Office in Latvia, AUDI Latvija, Riga International Airport, Embassy of Turkey to Latvia, Swedbank, Investment and Development Agency of Latvia and Magnetic Latvia, Live Riga, Boston Global Forum, Michael Dukakis Institute for Leadership and Innovation and AIWS.net.

Other contributions to the conference have been made by BALTA, Canelle, Mario and Skriveri Sweets.

We are grateful to our longtime partner and venue provider – the National Library of Latvia.