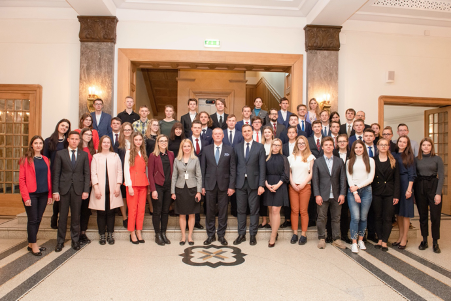 On 15th May 2019 the Latvian Transatlantic Organisation, in cooperation with Ministry of Foreign Affairs, Ministry of Defence, to celebrate the 15th anniversary of Latvia’s NATO membership and the 70th anniversary of the Alliance, organised a NATO simulation game. The summit took place in the premises of the Ministry of Foreign Affairs and the military base of the Latvian National Armed Forces in Ādaži. Its aim was to promote knowledge and interest among young people in NATO, international security and defence policy issues, and understanding of the NATO decision-making process.

In the simulation game, each team represented one of NATO’s member states and had to reach agreement of a joint statement while continuing to defend their country’s position on specific political, military, economic and social issues. The first three winning teams received the opportunity to visit NATO headquarters in Brussels, as well as invitations to the Riga conference in October and valuable books.